Technology can be both a boon and a curse. While some people misuse it for malicious purposes it can also be used for protection against those very elements. There are various gadgets that assist people in security of themselves and their loved ones. It includes devices like CCTV cameras, security systems, smart locks etc. We have even seen the introduction of smart doorbells to the scene. Everything is turning smart these days, some of which often surprises us. One such smart device is Ultraloq.

Created by U-tec, Ultraloq is a smart door handle. A door is the entrance to a house and Ultraloq’s job is to let only the right one in. Only authorized person can unlock Ultraloq through different means. One of those is fingerprint identification. Ultraloq has a fast and advanced 2nd generation fingerprint sensor. It only takes 0.3 seconds to recognize a fingerprint and unlock the handle. This sensor works just the same even when the finger is wet or extremely dry. A lot of scanners fail to recognize fingers under such conditions but that’s not the case with Ultraloq. Ultraloq can register up to 120 different fingerprints.

Other than finger ID, you can also set Ultraloq with a password. Ultraloq has a feature that allows you to input your password camouflaged between a set of random digits. Ultraloq automatically recognizes the password among the numbers and unlocks the door. Thus, even if someone is looking, they can not know your real password. Aside from this, you also get a mechanical key which you can share with your trusted ones. It is also helpful in case Ultraloq runs out of power and there is no other way to unlock it.

Ultraloq comes with Ultraloq Bridge, a WiFi adapter that makes it possible to connect it over WiFi. This makes it possible to monitor Ultraloq via a smartphone which comes with a bunch of benefits. With the Ultraloq smartphone app it is convenient to lock or unlock the handle instantaneously. With the app you can generate dynamic keys that can can provide temporary access. You can set an expiration date for a key after which it will be destroyed. You can also choose how many times can the key be used for unlocking. The app can be used to send a notification every time Ultraloq is unlocked. It also keeps a log of time the lever was unlocked.

You can set Ultraloq up to lock itself automatically once the door is closed. You can opt for the Passage Mode if you want to keep the door open. Pushing a button present on Ultraloq will keep the door unlocked and open for however long you want. Ultraloq has a simple voice assistant that can help someone not knowledgeable while setting it up for the first time. The voice assistant also sends out voice alerts when the battery is low.

Ultraloq needs 3 AA batteries to work. U-tec promises of Ultraloq having a battery life of around a year. It can last a total of 8,000 accesses. The battery life depends on the distribution of those accesses. 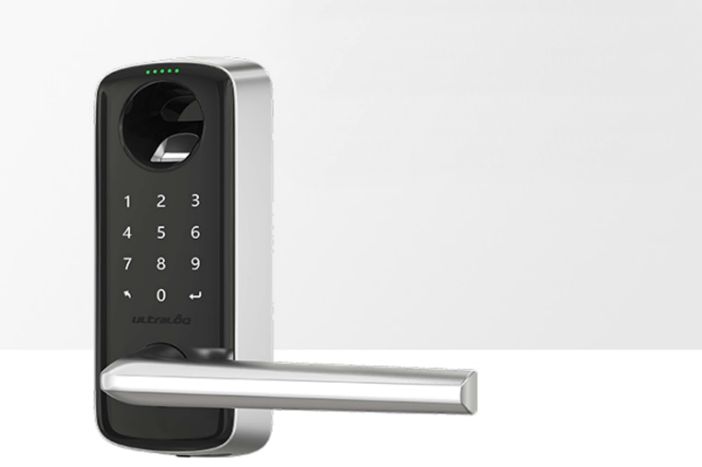 Ultraloq comes with secure 128-bit AES encryption. For additional security, there is a second layer of protection in form of Dynamic Key. A Dynamic Key is a code of completely randomized numbers. Each data transfer gets a different dynamic key which gets destroyed after the transfer is complete. Hence, there is always a new key for every process which makes it impossible to guess. So even if someone somehow gets through the AES encryption, they can’t go through this little soldier. It is made of a premium Zinc allow which can easily take some physical abuse as well.

Ultraloq is a highly secure and smart security gadget. Security is what matters and Ultraloq delivers that without any gimmicks. While Ultraloq alone might not be enough for everyone but it can surely make for a great addition to a security system.