Robotics is an interesting and advanced field of technology. It has given birth to some gadgets which once people could only dream of. It includes automated machines that work over Artificial Intelligence to help make things easier for us humans. Technology has reached a highly advanced stage, and we keep getting introduced to various unique products. One such product is the new MarsCat.

Created by Elephant Robotics, MarsCat is the world’s first ever bionic pet cat. MarsCat is a fully responsive robotic pet that acts like a real cat. The robot is fully automated & autonomous and does not need any instructions for anything. The robot is fully interactive. MarsCat can even play with toys like real cats. It walks, runs, sleeps, sits, stretches, bites nails, kneads and does everything else what you expect from a real cat. It also meows at different tones and makes gestures like a cat does. However, the actions are autonomous and unpredictable. The robot does everything at random, you can never know what it is going to do next.

The robot can feel your touch. When you touch its head or scratch its back it can feel it and then respond to it. MarsCat can hear your voice and follow your commands. The robot can recognize various voice commands like “Hello”, “How Are You?”, “Run”, “Walk”, “Come Here” etc. The robot can actually see things and react to them. For example it can see toys and then play with them. The robot has moving object recognition and it can play with toys with precision.

MarsCat works on a quad-core Raspberry Pi which is easy to program for custom functions. It comes with 1 GB of RAM. MarsCat is completely open-source project and independently programmable. You get access to all the sensors and can completely change the robot’s actions and responses however you want.

MarsCat’s personality and character can be altered according to preferences. It has 6 different personality traits that can be changed ; enthusiastic or aloof, energetic or lazy, social or shy. The robot develops her personality over time with the help of machine learning depending on how you treat her.

The robot has 16 servo motors inside that are responsible for all of its movements and actions. There are 2 motors in the tail, 6 motors in the hind legs, 6 in front legs and 2 in the head. The robot has a built-in camera, microphone, laser sensors, distance sensors and touch sensors. The robot has two OLED displays in the eyes, one in each. There is option to change eyes feature like eye color, blinking effects etc. You also get 4 extra changeable paws. Three toys too are provided along with the product which includes a cat teaser, a cat ball and a toy fish. MarsCat is available in four colors ; White, Grey, Ginger and Black. 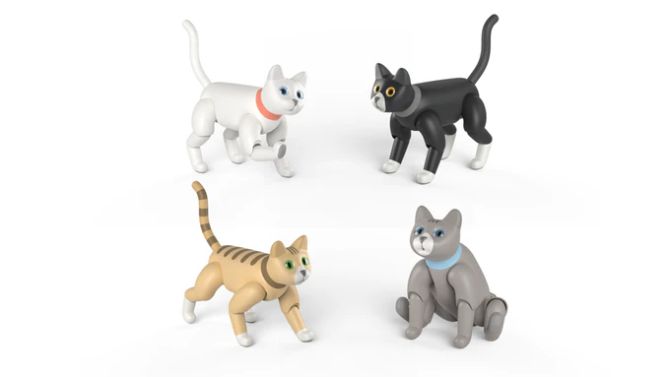 The robot works on a built-in rechargeable 6800 mAh battery. It is chargeable by any regular USB Type C cable. It takes around 3 hours to fully charge it and one full charge can last from 2 to 5 hours.

The robot weighs around 2.5 kg which is not really heavy. MarsCat is quite portable. MarsCat can never replace a real cat but it gets quite close to imitating one. For any technology enthusiasts or programmers, MarsCat will be a fascinating product.