We live in a busy world nowadays. It’s just competition and rush out there. Such times call for having maximum productivity to make the most out of the time you get. Advanced technology has provided multiple solutions for this cause. A lot of work has shifted to computers for efficiency. But sometimes it’s just not enough. A computer or laptop screen has its own limitation after all. That’s where second monitor come into play. Extra monitors have been a thing for quite a while now. Some offer two displays and some even three. Others offer some other features. The latest to join the list is Espresso Displays.

One of the selling points of such displays is always the space efficiency. It is good if it requires less space and is more portable. Several companies make claims about portability with displays that are really thin. Espresso Displays here claim of being the world’s thinnest display monitor. That actually checks out as the monitor is only 5 mm thick. It is uniformly 5 mm thick from top to bottom. A lot of monitors have varying thickness across it surface. The thinnest monitor screen available currently is around 7 mm thick at the thinnest point. Espresso cuts out on even that with a good 2 mm. This makes Espresso Displays a winner in terms of portability.

Espresso is available in two different variants of LED screens according to screen size. One is 13.3″ big and another is 15.6″. The screen resolution is limited to 1080p which might be a negative to some. The screen is completely touch-controlled. It allows multi touch with up to 10 touches at the same time. The screen has a contrast of 800 : 1. It is also pretty bright with a brightness level of 320 cd/m^2. The thin build of Espresso Displays might raise a concern for durability. It can break under some pressure due to being so thin. However, these monitors are made from aeronautical grade Aluminum which is a very strong and durable material. Espresso Displays also have a glass panel in the front which is missing in other competitors. The glass panel adds some more durability to the displays.

The display obviously uses a stand. Espresso Displays come with two options for stands ; a Flip Case or MountGo. The Flip Case is an L bracket that forms a triangle shape with the display’s back side on the ground to support it. MountGo is a standard mount designed by Espresso Displays themselves. With the bracket or the mount, you can adjust the screen to get a viewing angle of up to 170°. 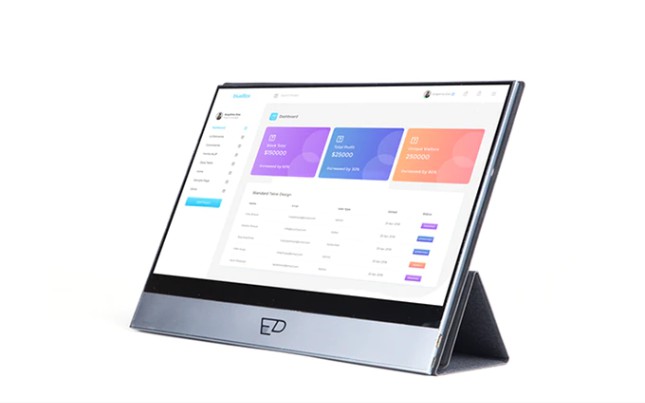 It has a Type C port for connection and charging purposes. It also has a mini HDMI port for mirroring mobile or laptops for increasing productivity. The screen supports both Windows and Mac. It also supports a variety of mobiles and gaming consoles as well.

The monitor weighs just 690 grams which is also lesser than a lot of display monitors. This increases the portability factor even more thus making Espresso Displays very travel-friendly. Still, it doesn’t compromise on the features. This makes Espresso Displays one of the best options available at the moment.